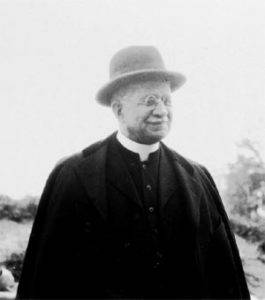 James Solomon Russell, priest, educator and founder of St. Paul’s College, was born into slavery on December 20, 1857, on the Hendrick plantation in Virginia. He was raised by his mother until after the Civil War, when his father, who had been working on a plantation in North Carolina, was able to join the family. Russell’s childhood was marked by poverty and hard work, as the newly-emancipated family struggled to run a small farm in Palmer Springs, Virginia.

Russell recounted in his autobiography that his mother gave him the middle name Solomon hoping that he would be as wise as his biblical namesake and that she made many sacrifices to ensure his education. As a young boy Russell attended a private school where his tuition was often paid in labor and food from the family farm. His education was frequently interrupted by financial constraints and the necessity of helping out at home but his mother always made sure he returned to school. Russell’s abilities caught the attention of the superintendent, who encouraged him to apply for boarding school, as his education could go no further in Palmer Springs. With the support of his parents and community, Russell entered the Hampton Institute in 1874, wearing a used hat and a suit made from wool grown in the neighborhood and woven on a community loom.

After completing his first year at Hampton, Russell was unable to pay the next year’s tuition and sought work as a teacher in order to save money. As part of his curriculum, his class recited the Apostle’s Creed every Friday afternoon. Community members began coming to the school to hear the children, including an Episcopalian woman who gave Russell the Book of Common Prayer. He was so impressed by what he read that he, “then and there became, spiritually, a member of the great Episcopal Church.”

Knowing he wanted to be a priest but unsure of how to accomplish his goal, he paid a visit to Mrs. Pattie E. Buford of Lawrenceville, a white woman who was interested in missionary work in the black community. Mrs. Buford brought Russell’s case to the attention of the Bishop of Virginia, Francis M. Whittle, who arranged for him to attend the Theological Seminary of Virginia at St. Stephen’s Church, Petersburg. Russell was the first and only student in a new school for the education of colored clergymen at the Seminary, which later became the Bishop Payne Divinity School.

He was ordained a deacon in 1882. That same year, he married Virginia Michigan Morgan, with whom he would have five children. Russell’s first assignment as a deacon was to Lawrenceville, Virginia, where he and his wife began a parish school in the vestry room of the newly created parish of St. Paul’s. In 1887 he was ordained to the priesthood, and a year later opened St. Paul’s Normal School with donated funds.

Russell’s vision for the school was to provide both a literary and an industrial education, based firmly on Christian principles. Students at St. Paul’s were equipped to be both educators and proficient tradesmen, but Russell also sought to imbue them with a sense of obligation to the community. Religion was a mandatory subject and students attended chapel twice daily.

Russell served as Principal and Chaplain of St. Paul’s from its foundation until his retirement in 1929. One of the most prominent African American priests in the South, he was elected Suffragan Bishop of Arkansas and, later, Suffragan Bishop of North Carolina. He declined both posts in favor of continuing his work at the school. Russell was appointed the first Archdeacon for Colored Work in the Diocese of Southern Virginia, and in 1917 became the first African American to receive an honorary degree from the Virginia Theological Seminary. During a trip to Liberia in 1922, Monrovia College awarded him an honorary Doctor of Law degree, and he was made Knight Commander of Liberian Humane Order of African Redemption by the Liberian government in recognition of his contributions to the education of African Americans and his prominence in the Church. Upon his retirement in 1929, he received the Harmon Award for his evangelical work.

James Solomon Russell died on March 28, 1935. His autobiography, Adventure in Faith, was published the following year. In 1996 the Diocese of Southern Virginia named him a local saint in recognition of his service to the community.

Your ticket for the: Reverend James Solomon Russell