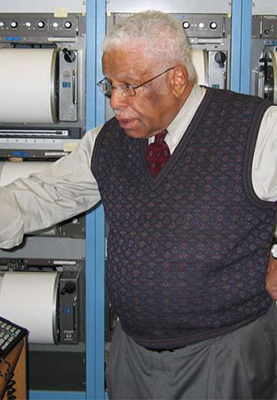 Waverly Person, known to many people around the country and the world as “Mr. Earthquake”, and to friends and family as Johnnie, worked hard to get to the top of his profession.  Born in Brunswick County, VA at the Mecklenburg County line in the Blackridge area, Person grew up on his family’s farm where they raised tobacco, cotton, and peanuts.  His father Santee and mother Bessie worked hard to make sure that he and his 9 brothers and sisters got an education so that they could have a better life.  He attended Good Hope School until the 7th grade, and then Saint Paul Normal and Industrial School in Lawrenceville, where he received his high school diploma.

At the age of 19, he went into the Army and served during World War II for two years before returning home, where he enrolled in Saint Paul’s College and received a bachelor’s degree in mathematics. It was at this time he met his future wife Sarah Walker, who was also from Brunswick County and was a student at the college as well.  After serving in the Korean War, he settled in the Washington, DC area.

Using his bachelor’s degree in mathematics, he took a job in the late 1950s as a physical science technician at the U. S. Department of Commerce in Washington, D.C.  At the time, the department handled the recording of earthquake activity and had a seismograph set up in the lobby of the building. One of his jobs was to change the drums that recorded earthquake activity.  It was at this time that he decided he wanted to make a career in earthquake science.   Person worked during the day and went to night school to become the first African American geophysicist in earthquake seismology.

In 1972, the National Earthquake Information Center was moved to Golden, Colorado.  Person eventually worked his way to the top, becoming Chief of the National Earthquake Information Center in 1977, a position he held until his retirement in 2006.  One of Person’s jobs was to talk with the press from across the country and the world when an earthquake occurred.  He knew about earthquakes in a way that he could explain them to the public and could reassure people and still not make them complacent.

His job also included working with a team of scientists who were responsible for locating and determining the magnitude of earthquakes occurring in the United States and around the world and was on call 24/7. He and his team would analyze seismograms from thousands of moderate-to-large earthquakes a year.  He had to communicate with emergency response agencies and the media about the earthquakes that did cause alarm or damage. He also managed the documentation of all earthquakes in published bulletins.  Person, now 90, still lives in Boulder, Colorado.