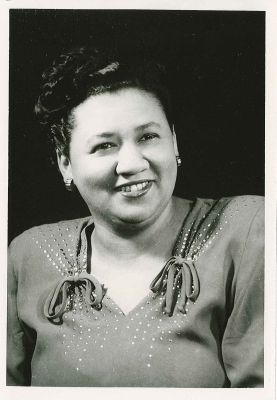 Helen Grey Edmonds was born in Lawrenceville, VA on December 3, 1911 to John and Ann Edmonds. She graduated from Saint Paul Normal and Industrial School, and received her bachelor’s degree in history from Morgan State College in 1933. After graduation, she taught history and other subjects at the Virginia Theological Seminary before becoming Dean of Women at Saint Paul’s College. In 1938, she received her master’s degree in history from Ohio State University, where she also became the first African American woman to receive a Ph.D. in history. Edmonds joined the faculty of North Carolina College, now North Carolina Central University, in 1941.

During her more than 30 years at the university, she taught history, served as Chair of the Department of History, Dean of the Graduate School, and was named University Distinguished Professor. She retired in 1977, and became a member of the Board of Trustees. She lectured around the world and was involvement in civic, political, and social organizations, including Links, Inc.; Delta Sigma Theta Sorority; 100 Black Women; National Council of Negro Women, Inc.; NAACP Legal Defense and Educational Fund; the National Humanities Center; the Association for Women in Math; and the United Negro College Fund.

At the 1956 Republican National Convention in San Francisco, she seconded the nomination of Dwight D. Eisenhower, becoming the first African American woman to second the nomination of a candidate for President of the United States.

In 1970, President Richard M. Nixon appointed Edmonds as an alternate delegate to the United Nations General Assembly, where she chaired the Human Rights Committee. She wrote many scholarly articles on politics in the South, and was author of two books: The Negro and Fusion Politics in North Carolina, 1894-1901; and Black Faces in High Places.
Edmonds died on May 9, 1995