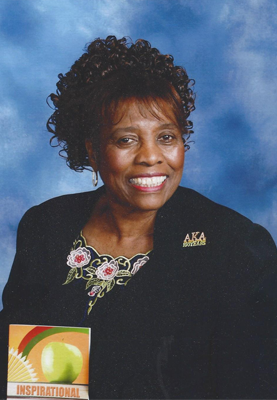 Christine Easterling was born in Blackstone, VA, to Harriett and Lynwood Davis, Jr. She received her early education in the Nottoway school system, and graduated from the Luther H. Foster High School in 1958. She attended Saint Paul’s College and was very involved in drama, AKA activities, and many others. She graduated in 1962 with a BS degree in Business Education and furthered her education at Howard University, receiving a master’s degree in Public School Administration in 1969. She received another master’s degree from the University of the District of Columbia in 1979 in Curriculum Development. She also pursued additional doctorial work at George Washington University.
Ms. Easterling entered the DC educational system, and for thirty years brought professional development to the District of Columbia in the field of education. Her activities included: Vice-Principal-District of Columbia Public Schools, Director of The Teaching Professions Academy, and President of the DC Retired Educators Association.
She authored four books; Inspirational Treasures: Essays by Educators and the Students Reflecting the Joy of Teaching, A Giant for Justice: Inspirational Biography of William H. Simons, You Can Move Your Mountain-Moving Faith, and Miracles of Jesus.
She was presented the Theta Omega Wilma Tootle Award, the Regional Authors Award, the Margorie Holloman Award, many AKA awards, the State Vice-Principal of the Year Award, the National Association of School Administrators Award, the National Education Association “Teacher of the Year” Award, the American Business Women’s Association Speaker’s Award, the National Association of Secondary School Principals Accommodation, the President’s Medal for Excellence in Teaching, and the Saint Paul’s College Awesome Recognition Award.